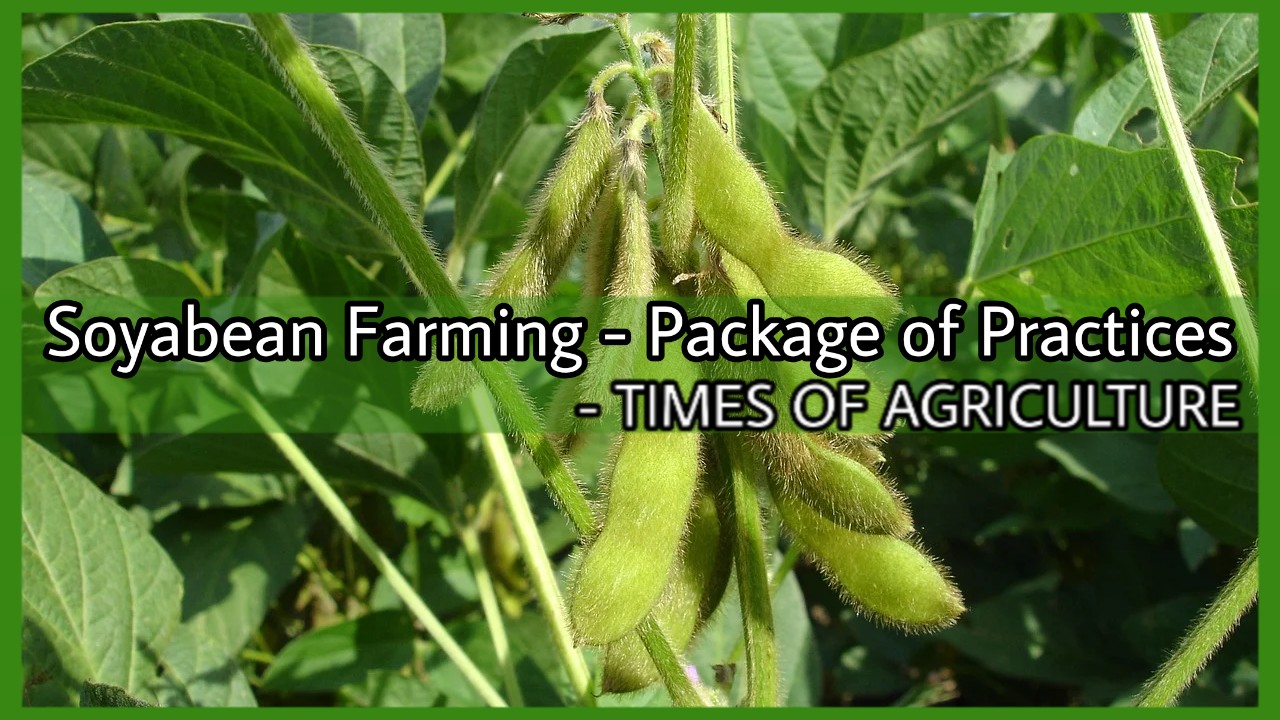 Economic importance of Soybean: Soybean is the most versatile oilseed cum pulse crop grown around the world. It is the source of vegetable oil most importantly. Soybean is the major oilseed crop in the world accounts for 50 % of the total area as well as production. It provides approximately 60 % of vegetable protein (rich in lysine) and 20 % oil. Hence, known as wonder crop/yellow jewel, it is also used in industrial applications such as biodiesel. Beans are used for the preparation of the beverage, curd, milk, ice cream, candy consequently oil extracted from the beans used for making glycerine, celluloid’s, explosives, varnishes, paint and soap etc. It is also involved in Nitrogen fixation process through their nodules, Bradyrhizobium japanicum is the microbial organism responsible for nodulation in soybean. It has a rich source of vitamins, minerals, and beneficial compounds such as, isoflavones, therefore regular intake of soybean can reduce the risk of breast cancer.

Land preparation in Soybean: soybean is the versatile crop it can be grown around the world, however, it needs fertile well-drained loamy soil for maximum output. Water logging is injurious to the plant. It needs 15-32◦c temperatures for the initial stage. on the other hand it requires high temperatures for their further growth. The average rainfall is 60-65 cm on the other hand drought occurs during floral initiation may dangerous to the crop, it leads to flower and pod drops. The Land is ploughed to get a fine tilth and form beds and channels.

Time of sowing and seed rate for Soybean: There are two seasons for growing soybean, which are Kharif and spring season. Incase of Kharif, sowing is done before the onset of monsoon while spring, is done at fortnight of February or March. Incase of Kharif, 70-75 kg of seeds/ha, for spring, 100-125 kg/ha, and for fodder purpose 20-30 kg of seeds/ha is needed for sowing. Line sowing by driller is followed for sowing. Before sowing seeds are treated with Rhizobium culture for effective nodulation or treat the seeds with thiram or carbendazim 2g/kg. Seeds are placed in 2-3 cm depth in heavy soil and 34cm for light soil adopting a spacing of 30×5 cm. Seeds are coated with ZnSO4 @ 300mg/kg, using tapioca flour(250ml/kg) as the adhesive agent to enhance the field stand.

Weed management in Soybean: The field should be free from weeds up to 40 days. The weeds are controlling naturally by following 2 hand weedings at 20 and 35 DAS. castor is used as an intercrop to control the weeds. The weeds are controlled chemically by the spraying of pre-emergence herbicide pendimethalin @3.3l/ha and post-emergence application of imazethapyr 75-100 g a.i /ha is recommended for effective control.

Bihar hairy caterpillar in Soybean: Scientific Name is spilosoma obliqua .The symptoms caused by the BHC are, The young larvae feed the chlorophyll content on the underside of the leaf. That’s why leaves look like a brownish web later the growing larvae eat the leaves from the margin.It can be controlled chemically by spraying of chlorpyriphos 20 EC @1.5 L /ha or triazophos 40 EC @0.8 l/ha or quinalphos 25 EC @1.5l/ha can reduce the attack of BHC. It can be controlled naturally by the collection and destruction of larvae, infested plant parts, and the young larvae further soybean is intercropped with pigeon pea/maize/sorghum @ 4:2 ratio can be followed and installing light trap 1/ha to attract the adult moth and following deep summer ploughing. By practicing these methods can reduce the incidence of the caterpillar.

Gram pod borer: Helicoverpa armigera is the scientific name of the pod borer. The caterpillar feeds the leaves gregariously later it moves to pods and leads to defoliation and ill-filled pods respectively. By adopting both chemical and biological methods, it can be controlled. Biologically control by deep summer ploughing to expose the pupa and kill them, installing bird perches @50 /ha may invite the predatory birds and kill the larvae further installing light trap can attract the moth and also installing pheromone trap @12/ha can attract the male moth and disturb the population. Spraying of chlorpyriphos 1.5%DP @1200ml/lit and quinalphos 125 EC 1.0 l/ha is recommended to control.

Stem fly: The Scientific name is Melonogromyza sojae. The maggots can feed the cortical layer of the stem and it extends to tap root and kill the plant. A distinct red colour zig-zag tunnel can be seen on the infected plant while splitting. Spraying of following insecticides can control the pest, dimethoate 30 EC 0.03l/ha, or quinalphos 25 EC 0.05% can reduce the attack of stem fly. Biologically it can control by deep summer ploughing, remove and destroy the affected plants may reduce the incidence of the stem fly.

Tobacco caterpillar: Spodoptera litura is the scientific name of this caterpillar. The symptoms are, the larvae feed the leaves gregariously and cause defoliation. To alleviate this problem chemically by apply polytrin 44% @ 1 l/ha or profenophos 50 EC @ 2.00l/ha and it can be control biologically by deep summer ploughing, collection and destruction of larvae and affected plant parts and installing light trap 1/ha and pheromone trap with spodolure 5/ha can reduce the attack of this caterpillar.

Girdle beetle: The scientific name of the pest is Obereopsis brevis. symptoms and damage of the pest are, the beetle affects the petiole and stem first, by girdling of the stem the beetle get inside and eat the stem later it forms the tunnels. In severe stages the plant is cut down about 15-20 cm above the ground. It can be controlled by spraying of quinalphos 25 EC 2ml/l or triazophos 40 EC 2ml/l, Biologically by, follow proper crop rotation, deep summer ploughing and avoid excess nitrogenous fertilizer.

Soybean aphid: Aphis spp is the scientific name of this pest. The insect sucks the sap from the plant and it leads to withering and curling of leaves, stunted plant growth, and finally reduction in yield. To alleviate this problem chemically by spraying of dimethoate 30 EC @2ml/l/quinalphos 25 EC 0.05% 2ml/l is recommended. The Dusting of cow dung ash or spraying of clay suspension should be recommended.

Alternaria leaf blight: The Casual organism is Alternaria tennuisima. The symptoms produced by Alternaria are the appearance of brown necrotic spots with concentric rings coalesce and form large necrotic areas. Later the leaves may dry and drop prematurely. It can control by using healthy seeds and destroy crop residues from the field biologically. Control chemically by seed treatment with mancozeb 2.5 g/l /carbendazim 1g/l is recommended.

Anthracnose/pod blight: Colletotrichum truncatum is the casual organism of the disease. The symptoms produced by this pathogen are, dark brown sunken spots on cotyledons and leaves. In later stages infected pods are covered with the dark colour fruiting body. Seed treatment with thiram/captan 2g/kg of seeds and following crop rotation with cereals may reduce the infestation. The Spray of mancozeb 2.5g/l can be recommended for control the pathogen.

Bacterial blight disease of Soybean: The casual organism is Pseudomonas syringae pv. glycinea. It causes small, angular, translucent, yellow spots on the leaves. The plants are stunted and chlorotic. Later black lesion developed in stem and petiole and affects the yield. It can be controlled by using healthy seedlings and following deep summer ploughing by biologically. Control the pathogen chemically by seed treatment with streptocyclin 250 ppm @ 2.5 g/10 kg of seeds and application of copper fungicides 2.5g/l along with streptocyclin 250 ppm are recommended.

Charcoal rot/ashy/stem blight/dry root rot: Macrophomina phaseolina is the casual organism responsible for this disease. The symptoms produced by this pathogen are, lower leaves become chlorotic, blacking, and cracking of the root and wilting of the plants. The sclerotia seen on the lower stem and roots look like powdery mass, hence this is known as charcoal rot. It can be controlled chemically by seed treatment with thiram/carbendazim 2g/kg of seeds. By adopt biological methods, seeds are treated with Trichoderma viride 2g/kg of seeds, or Pseudomonas fluorescence 10g/kg of seeds is recommended.

Frog eye leaf spot: The disease is caused by Cercospora sojinae. The symptoms are, circular or angular lesion the leaves, later coalesce to form large necrotic spots. Later the affected leaves wither and fall prematurely. It can be controlled naturally by using healthy seeds and proper crop rotation, chemically by seeds are treated with thiram/captan 2g/kg of seeds is recommended

Rhizoctonia aerial blight /Web blight: Rhizactonia solani is the casual organism responsible for this disease. The symptoms produced by this pathogen are, a water-soaked brown lesion on the leaves later it turns to tan colour/dark brown colour. Dark brown sclerotia found on leaves and petioles. The diseases control chemically by seed treatment with captan/thiram 2g/kg of seeds or use copper-based fungicides are recommended. Biologically by using healthy seeds and avoid dense planting.

Soybean mosaic disease of Soybean: The virus disease is caused by soybean mosaic virus (SMV). The affected plants are stunted with distorted. The affected plants produced seeds are flattened or curved and affected seeds fail to germinate. The disease is controlled chemically by foliar spray of Thiamethoxam 25 WG @100g/ha or Methyl demeton @800 ml/ha recommended for reducing the vector and using healthy /certified seeds can reduce the incidence of this virus by naturally.

Harvesting and Yield in Soybean Farming Package of practices

Harvesting of Soybean: soybean crop can attain maturity ranges between 50-145 days after sowing depends upon the variety. While maturity, the leaves are turning yellow and fall and the stalk stands in the field with pods. At the time of harvest the moisture content should be 15%. Harvesting is done by breaking the stalk by sickle from the base or ground level manually. After that threshing is done by soybean thresher.

Yield of Soybean: Yield of soybean is dependent upon a variety. It yields about 18-35 quintals/ha.

Soybean comes under pulses. Pulses are the cheapest source of protein. Generally, pulses are consumed after splitting of the pods. While the seeds are going storage, the moisture content should be less than 10% and packed in gunny bags. At fortnight interval the seeds are treated with captan 3g/kg of seeds, necessary to control the disease spread.

Economics of Soybean Farming: Soybean has the richest oil and protein source. Nowadays it is also used in the preparation of biodiesel. Hence, the value of soybean is increased day by day due to their various uses, especially for their protein sources. cost of cultivation for soybean is Rs.18,400/ac and the Gross income is 84,000/ac. Finally, the farmer obtained Rs, 65,600/ac as a net profit. The farmer gets > 50 % profit from the soybean cultivation. Hence, soybean is the wonder crop.

Summary of Soybean farming: To sum up, soybean is one of the most profitable businesses. It contributes more export potential. It has the richest source of protein and oil content. The oil has omega-3 fatty acids; it’s good for heart patients. Moreover it has various medical properties. Therefore the demand for soybean increases day by day. So, the cultivation of soybean can give maximum profit to the farmers.