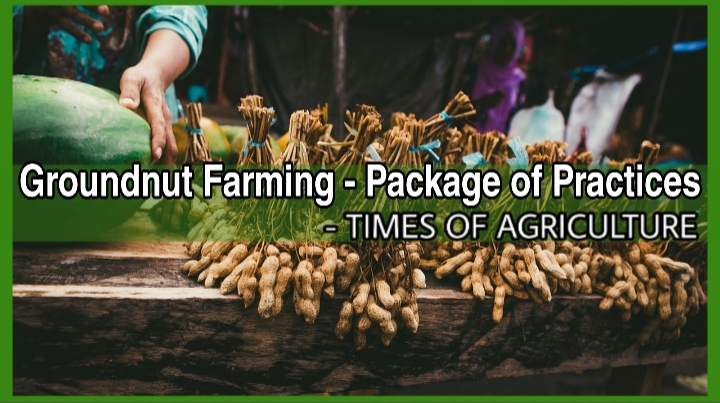 Economic importance of Groundnut:  Groundnut is the important oil seeds in India. It contains 45% oil and 26% protein in kernels. The kernels are eaten as raw, toasted, or sweetened. It has vitamin sources of Vit A, B, E, arginine, foliate, and copper, besides ground to flour and used in confectionery. Its oilcake containing 7.3% of Nitrogen in and used for manufacturing artificial fibers. Groundnut oil used in soap making, lubricants, cosmetics, dyes, paints, and emulsion for insect control. Its haulms used as a cattle feed and hulls are used as furfural, fuel, and filler for fertilizers. The seed oil yields vegetable ghee after hydrogenation. Its roots contain ‘nitrogen-fixing’ bacteria to fix Nitrogen and make available to the plant. Above all, it is called the ‘king of vegetables’.

Sowing time and seed rate in Groundnut Farming: Sowing time is the last week of May to the first fortnight of June. Plant population in bunchy type is 3.33 lacks and spreading type is 2,22 lacks/ha. The seeds are placed in 5 cm depth. Seed rate for a bunchy type is 80-100 kg/ha at 30-40x20cm spacing and for spreading type 60-80 kg/ha of seeds should be placed at 45-60×20 cm space. For bold seeded varieties 10% of the extra seed is needed. Place one seed per hole. At the time of sowing temperature is around 18◦C. In groundnut bunchy type is a non- dormant on the other hand spreading type is the dormant one, it requires 2-2.5 months for germination, for instance, the dormancy can be broken by high temperature, storage and use of ethylene chlorohydrins @ 0.7% and seed soaking in 5-10 ppm solution of NAA, IAA.

Nutrient management in Groundnut: Soil fertility is important for groundnut cultivation. Fertilizer is given based on the soil test. If soil test is not done follow blanket recommendation 10:10:45 kg of NPK / ha for rain fed likewise17:34:54 kg of NPK/ha for irrigated as a basal application and 60 kg of sulfur is applied under irrigated condition. Ammonium sulfate and SSP are excellent sources of Nitrogen and Phosphorous respectively.

How to overcome Pod filling problem in Groundnut Farming

In bold seeded varieties, pod filling is the major problem. it can be minimized by the combined nutrient solution. Take 2.5 kg of DAP,1 kg of Ammonium sulfate and, 0.5 kg of borax in 37 litres of water and keep it overnight. The next morning, the solution is filtered and 32 lit of mixture is obtained. It can be made up to 500 lit for one ha. planofix @350 ml can be added in this solution. It is sprayed on 25th and 35 DAS.

Water management in Groundnut: Groundnut is sensitive to water logging conditions. Providing proper drainage facilities to enhance productivity. If it is sown in rain fed conditions proper drainage facility is needed. Keep the surface soil always moist without water logging is necessary. Proper irrigation is given at critical periods, they are flowering, pegging and pod formation stage. Irrigation is reduced while the crop attains pod formation stage. The water requirement of the groundnut is 600-650 mm. Extra irrigation may invite diseases. So proper irrigation is important. Sprinkler irrigation is more effective than flooding. IW/CPE ratio for groundnut is 0.4 and 0.6 at vegetative and reproductive stages.

Weed management in groundnut: Groundnut cannot have the ability to compete with weeds for 3-6 weeks after sowing therefore removal of surrounding weed is necessary. The combination hand weeding and herbicide can control the weed effectively. The hand hoes are not used for weeding 45 days after sowing because it creates damage to the pegging. Chemical weed control practices include pre-planting and incorporation and pre-emergence application of fluchloralin @2lit/ha followed by hand weeding are the best methods. If chemical herbicide is not given, provide 2 hand hoeing on 20 and 40 DAS. Groundnut is intercropped with a red gram, black gram, sunflower, gingelly, pearl millet to reduce the weeds.

Red hairy caterpillar of groundnut (Amsacta albistriga): Signs/ symptoms of the insect pest are defoliation, during a severe attack the caterpillar move in groups destroying the field after field. Damage is more during monsoon. Chemical control by spraying recommended Quinalphos 4D,Phosalone 50 EC – 750 ml/ha. However, natural/biological control of insect pest by hand-picking and destruction of larvae. Deep summer ploughing, installing a light trap to monitor the adult and bonfire. Intercrop with cowpea @1:4 as oviposition attractant. Trenching around the field to prevent migration of larvae. Spray NPV @1.5X106 POB. Predator: Cantheconidia furcellata.

Leaf miner of Groundnut (Apoderema modicella): Signs/ symptoms of insect pest are Brown blotches in the midrib, the terminal leaves are webbed with patches, plants get distorted and finally get dried up. Chemical control by spraying of quinalphos 25 EC, Phosalone50 EC- 750 ml/ha is recommended. Natural/biological control of insect pest by collection and destruction of mining leaves. Installation of light traps 1/ha is also advisable. Grow groundnut early and synchronize with rabi and rainy season. Intercrop with pearl millet 4:1 ratio.

Tobacco caterpillar of Groundnut (Spodoptera litura): Signs/ symptoms of insect pest are Skeletonization and defoliation of leaves.  Chemical control by Spraying of malathion 50 EC 1 ml/ lit is recommended. Natural/biological control of insect pest by collection and destruction of affected parts along with caterpillar. Installation of light traps 1/ha is also advisable.

Stem borer (Sphenoptera perotetti): Signs/ symptoms of insect pest: Plant branches may droop and the plants show wilting symptoms.   Chemical control: Dust the Carbofuran 3G-25kg/ha in soil.Natural/biological control of insect pest: Collection and destroy adult beetles. Summer ploughing and flooding. Sunhemp is used as a trap crop. Neem and ailanthus are used as a border crop to attract the beetles.

Pod borer  Anisolabis stali: Signs/ symptoms of insect pest: Young pods showing boreholes plugged with excreta and sand particles. Discoloration of pods, pulps without a kernel. Chemical control: A dusting of Carbofuran 3G-25kg/ha is recommended. Natural/biological control of insect pest: Collection and destroy adult beetles. Summer ploughing and flooding. Sunnhemp is used as a trap crop. Neem and ailanthus are used as a border crop to attract the beetles.

Dry root rot disease of Groundnut: Macrophomina phaseolina /Rhizoctonia bataticola is the causal organism of Dry root rot disease of Groundnut. Symptoms of the disease are pre-emergence: rotting of the seeds before the emergence of the seedling. Post-emergence: rotting of the collar region of the seedlings. Chemical control of the disease is soil drenching with copper oxychloride. However, control the disease naturally or organically by shallow sowing of seeds and wider spacing is recommended.

Crown rot disease of Groundnut: The disease is caused by Aspergillus flavus. Signs/ symptoms of the diseases: Rotting at the basal portion of the plant on a well -established plant, spreads upward and leads to the death of the entire plant. Chemical control: Soil should be drenched with copper oxychloride.  Natural/ organic control of disease: Shallow sowing of seeds and wider spacing is recommended.

Rosetting Virus disease of Groundnut: It is caused by Groundnut rosette virus. The vector of the disease is Aphis craccivora. Signs/ symptoms of the diseases: Mosaic mottling of the leaves with alternate dark green and light patches. Stunting of the plant. Bushy appearance due to the proliferation of the Auxillary buds. Chemical control: Spraying of imidacloprid 17.8 SL 100-125 ml in 700 liters of water for vector management. Natural/ organic control of disease: Destruction of infested plants.

Bud necrosis disease of Groundnut: Casual organism is Tomato spotted wilt virus (ToSpV). Vector is Thrips tabacci. Signs/ symptoms of the diseases: Necrotic symptom on the terminal portion of the leaves. Stunting of the plant. Bushy appearance due to the proliferation of the Auxillary buds. Chemical control: Spraying of methyl demeton 25 EC 500 ml or dimethoate 30 EC 500 ml/ha is recommended.Natural/biological control of insect pest: Lablab is intercropped with groundnut to control the vector.

Harvest the crops takes place at drying and falling of older leaves and yellowing of the top leaves indicate maturity. The inner side of kernel colour shall turn black. The seeds are moving to the inner side of the pod.

Harvesting of Groundnut: Groundnut is the non -determinant crop therefore maturity is not uniform. So observing the crop whether it attains a maturity or not and considering the duration (105 days from sowing). Pull out the random pods from the field and check it .if the pods are brown colour it is ready to harvest or white colour not ready to harvest prior to harvest, checking the soil moisture is necessary. Soil with moisture favors the harvest. if it is not irrigation is given before harvest. Finally, the plants are uprooted with mould board plough or country plough.

By using groundnut stripper pods are separated from the plants. They are allowed to sun drying for 4-5 days. While the temperature is very hot, avoid sun drying.it continues for 2 or 3 days for 2-3 days interval until complete drying. Then the pods are allowing to shelling after that sorting of groundnut to be done for eliminating dirt and stone particles. Next they are allowed to grading, it is based on colour and size of the pods. Then pods are stored in 8% moisture content. Aflatoxin can be managed effectively at this 8% moisture level. The graded pods are packed in a clean, dry, and odorless container. The seeds are used for cultivation purposes it can be stored up to 7-8 months.

Groundnut is fast earning short duration crop moreover it is a very lucrative business. Within 4-5 months, it gives maximum profit to the farmers, in addition, to enhance the soil fertility through nitrogen fixation. In groundnut cultivation, seed cost and the labour cost occupies the major input cost. By using own seeds and engaging minimum labour can reduce the cost of cultivation. The profit is >50% by direct sale, if it is going to an oil mill, gives a maximum return to the farmer.

Summary of Groundnut Farming: In short, Groundnut is the most profitable high yielding oil seed crop. It has a good protein quality and oil quality, also it comes well in both irrigated and rain fed conditions further it is a good leguminous crop used in crop rotation.