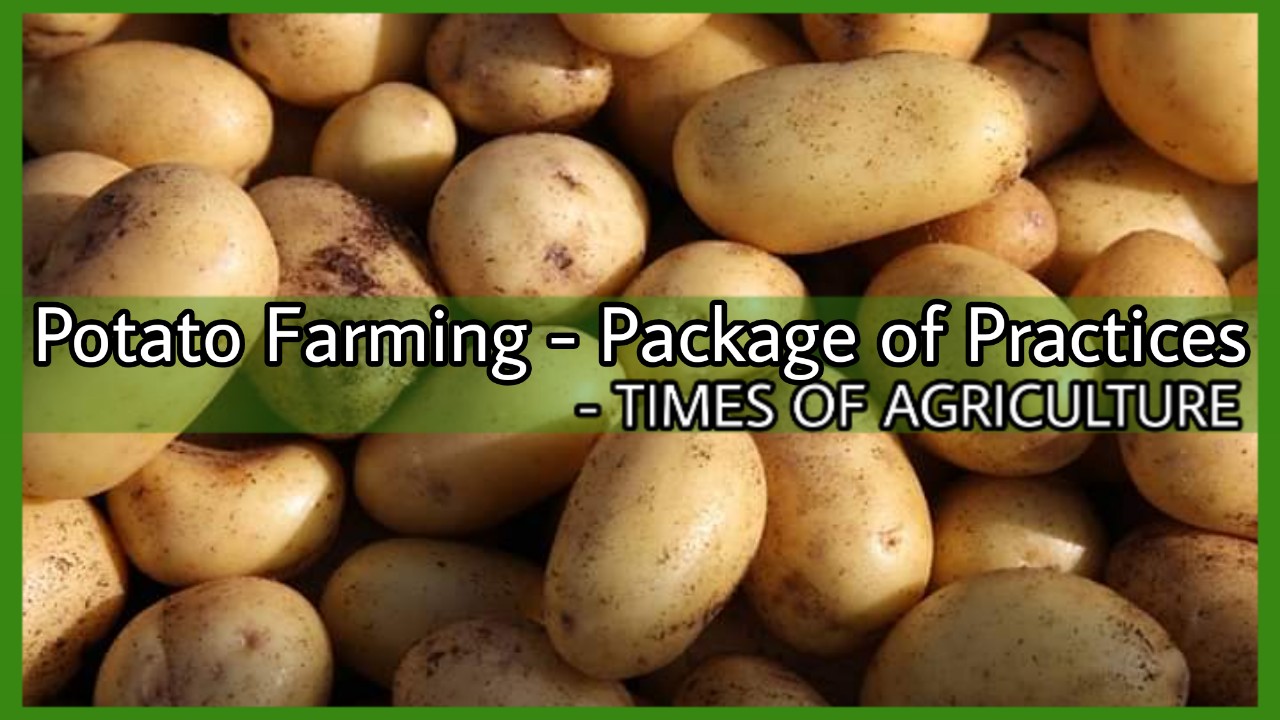 Potato (Solanum tuberosum) belongs to the family Solanaceae is the most important food crop of India. The potato is a crop also called as ‘poor man’s friend’. Potato is being cultivated in the country for more than 300 years. Potato is a temperate crop. Potatoes are an economical food; they provide low-cost energy to the human diet. Potatoes are a rich source of starch, many vitamins especially C and B1 and minerals. They contain 20.7% carbohydrates, 2% protein, 0.30% fat, 1.10% crude fibre and 0.9% ash. They also contain a high amount of essential amino acids like leucine, tryptophan and isoleucine, etc. In this post, we will let you know about Potato farming package of practices, Potato farming in India, Potato cultivation practices, potato farming guide, the economic importance of Potato farming,  states growing potato in India, potato seed varieties, spacing in potato, harvesting and yield of potato in Potato farming.

Climatic requirements for potato cultivation: Potato is a temperate climate crop, however, it grows under a diverse range of climatic conditions such as sub-tropical regions. It is a cool-season crop grown in India. The vegetative stage of the plant is best at a temperature of 24°C while tuber development is favored at 20°C. Potato is grown as a summer crop in the hills.

Soil conditions for Potato farming: Potatoes are produced on a wide range of soils such as sandy loam, silt loam, and clay soil. Soils for potato are friable, well-aerated, and well supplied with organic matter. Soil structure and texture has a considerable effect on the quality of the tuber. Alkaline soils are not meant for potato cultivation. They are well suited to acidic soils as acidic conditions tend to limit scab disease.

Selection of seed tuber: Potato is cultivated by planting tubers. Seed tuber is the costliest input in the potato cultivation process. The tuber is disease-free, well-sprouted and 30-50 g weight. The main advantages of cutting large tubers are to reduce the cost of seed and to obtain uniform sprouting of tubers. Tubers must be cut longitudinally through the crown eye and the weight should be around 30-50 g. The seed tubers are cut with a sharp knife before planting. Before cutting the tuber, the knife is disinfected with Potassium Permanganate formulation.

Land preparation in Potato Farming: Ploughing the land at a depth of 24-25 cm. Well decomposed FYM or compost (25-30 t/ha) is mixed with the soil during the last ploughing.

Method of planting in Potato Farming: Furrows are opened at 50cm before planting. The tubers are planted 15-20 cm apart on the center of the ridge and covered with soil. The seed rate is about 1.5-1.7 t/ha for round varieties and 2.0-2.4 t/ha for oval varieties.

Weed control in Potato farming: The potato develops canopy in one month after planting and weeds must be controlled at this time. The first hoeing on the 45th day without disturbing stolon. Next hoeing and earthing up can be taken up at the 60th day.

Insect pests of Potato, their symptoms, and different management practices:

Signs of Potato tuber moth include larva tunnels into leaves, stem, and tubers that lead to the loss of leaf tissue, death of growing points and breaking of stems. Irregular shaped galleries are seen with excreta near the tuber eyes. Chemically control the Potato tuber moth by spraying quinalphos 25 EC 1.0 L in 500 L of water per hectare. Treating seed tubers with quinalphos 1.5 D @ 1 kg/100 kg of tubers is recommended. Organic management of potato tuber moth include itercropping with onion, chilies are recommended. Earthing up at 60 days after planting and crop rotation is also advisable.

Diseases of Potato, their symptoms, and different management practices:

Symptoms of late blight of Potato disease are water-soaked spots and lesions appear on leaves, turn purplish-brown, and finally, black colour Whitish growth develops on the lower surface of leaves and spread to nodes. Stem breaks at these points. Control the late blight of Potato disease by spraying Mancozeb 0.2 % to prevent infection of tubers. However, non-chemical management/ Natural control/ Organic control through crop rotation and grow resistant cultivars.

Maturity indices/ Harvesting indices of Potato: The crop can be harvested at 70-120 days after planting. It is harvested when haulms start yellowing and falling on the ground.

Harvesting and yield of Potato: Potato crop is harvested at 15 days after cutting the haulms. Yield of Potato is about 300 to 400 quintals per hectare.

Conclusion: Potato cultivation is a boon to farmers with high yield and income if they take proper care and management.

3 thoughts on “How to Start Potato Farming – Package of Practices”