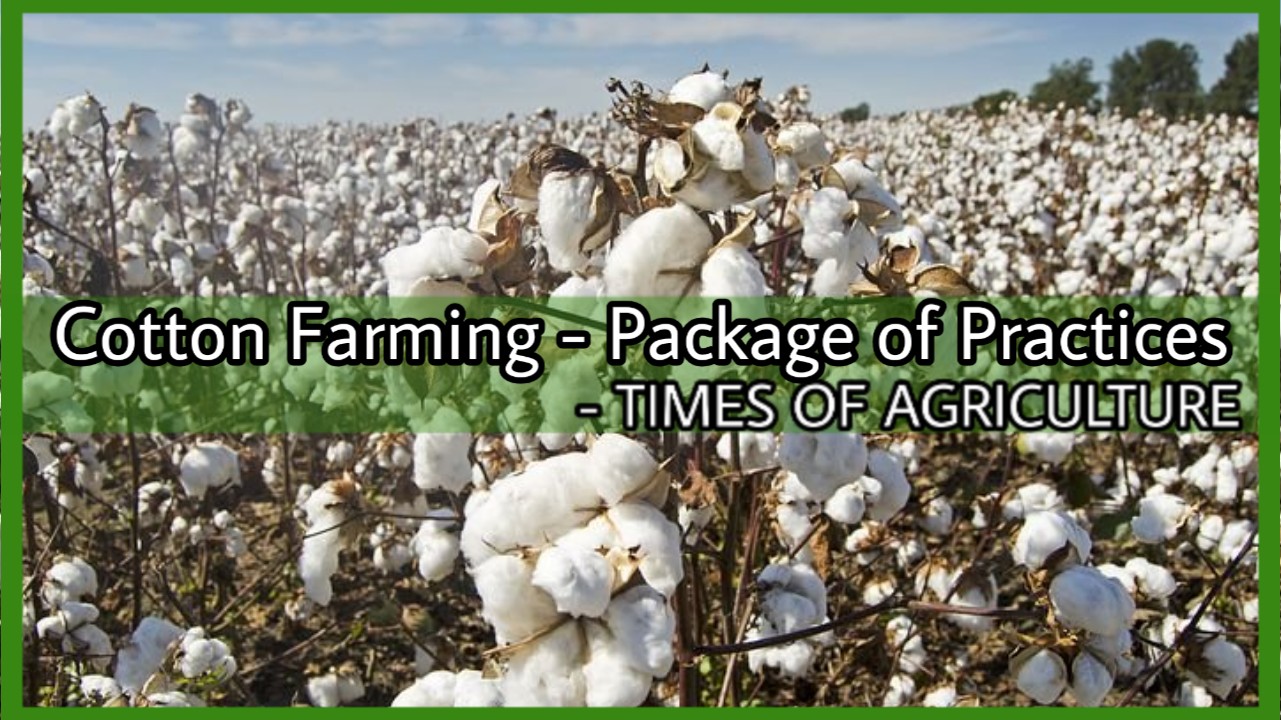 It is one of the most important cash crop and fiber crop of India. It provides the raw material- fiber to the cotton textile industry. Cotton lint is the most important vegetable fiber and woven into fabrics. Fuzz is used for the production of mattresses, photographic film, surgical cotton, and paper. Rarely, cottonseed oil is used for cooking purposes. Cottonseed cake contains 40% protein and used as a concentrated feed for cattle and poultry. The stem of cotton is used as organic fuel and manure.

Land preparation in Cotton: It is grown widely in tropical & sub-tropical conditions. A minimum temperature of 15 degrees Celsius is necessary for better germination at field conditions. The optimum mean temperature for vegetative growth is about is 21-27 degrees Celsius. Warmer days and cooler nights during fruiting are conducive to good boll & fiber formation and development. It is generally grown on a variety of soils ranging from well-drained deep alluvial soils to black clayey soils. Cotton is semi-tolerant to salinity but very sensitive to waterlogged conditions. Cotton grows well on properly prepared, well-leveled field, free from weeds and it must be free from clods. Leveling with leveler is also practiced and ridges and furrows are made.

Nutrient Management in Cotton farming: Spreading 12.5 t of FYM or compost or 2.5 t of vermicompost per ha as a basal dose at the time of last ploughing. Application of N at 60-80kgs, P at 30-40kgs, and Kat 30-40kgs depending upon variety and soil conditions. Application of 50 percent of N and K full dose of P as a basal and remaining half dose of N and K at 40 – 45 days after sowing. Also foliar application of 2% DAP and 1% KCl may be done to improve Kapas yield.

Cotton needs 700-1,200 mm water to meet its maximum water requirement depending upon its climate and growing regimes. The water requirement is less during the first two months after sowing & high during flowering & boll development. Cotton is generally flood irrigated although irrigation by furrow or alternate furrow method is a more effective method. For sandy loam soils of northern zone 3-5 irrigations are commonly given. On red sandy loam soils, -13 light irrigations are given.

Natural weed control in Cotton: Generally,one or two hand hoeing’s are given to remove weeds and to promote aeration and water conservation.

Chemical weed management in Cotton: Fluchloralin or pendimethalin @ 1 kg ai/ha as pre-plant incorporation with one hand weeding is recommended.

Leafhopper: Amrasca biguttula biguttula is the scientific name of leafhopper. Its damage symptoms are both the nymphs and adults suck sap from the lower surface of leaves. Young green leaves turn yellow and leaf margins curl downwards. Hopper burn in case of severe infestations. Natural management is by the installation of light traps. Chemical control is by spraying Monocrotophos36SL @ 1000 ml/ha.

Aphid: The scientific name of cotton aphid is Aphis gossypii. The damage symptoms include that the nymphs suck the sap and cause stunted growth, gradual drying of plants. Development of black sooty mold due to the excretion of honeydew in case of severe infestation.

Spotted or spiny bollworm: Earias vittela or Earias insulana is the scientific name. Damage symptoms include that the larvae bore into the growing tender shoots and feed internal content, resulting in drooping & drying of shoots. The infested bolls show plugged holes filled with the excreta.

Pink bollworm:  Pectinophora gossypiella is the scientific name of pink bollworm. Damage symptoms include that the larvae infest floral buds, flower & cause their shedding. They bore in the bolls & feed on inner contents later. As larvae enter the bolls, their very minute entry holes & it becomes extremely difficult to identify the infested bolls until they drop down on the ground.

American bollworm: The scientific name of American bollworm is Helicoverpa armigera. Larvae feed on tender foliage, squares, flower & bolls and cause severe damage. The management practices for bollworms are infested plants are cut and destroyed immediately. Installation of pheromone traps at 5 traps/hectare for each bollworm. Spray profenophos 50 EC at 2ml/l at the time of infestation.

Red cotton bug: Dysdercus cingulatus is the scientific name of the red cotton bug. Both nymphs & adults suck the cell sap from the leaves, tender shoots, and seeds of cotton. Due to excreta of the insect & the crushing of the nymphs during ginning the lint gets stained, and hence it is commonly called “cotton stainer”. Management is by dusting with methyl parathion 2D @ 20 kg/ha immediately after the insect appearance.

Dusky Cotton bug: Oxycaraenus hyalipennis is the scientific name of dusky cotton bug. Both Nymphs & adults suck the sap from immature seeds in open bolls of cotton. Management is by dusting with methyl parathion 2D @ 20 kg/ha immediately after the insect appearance.

Fusarium wilt: Fusarium oxysporum f.sp. vasinfectum is the causal organism of Fusarium wilt. Symptoms on young seedlings are yellowing and browning of cotyledons, with brown ring on the petiole and drying of seedlings, occurs. Symptoms at later stages include loss of turgidity, yellowing, drooping and wilting starting from older leaves and continue upwards. Browning of vascular tissues occurs on the stem and spreads upwards and downwards of the plant. Management is by treating the seeds with Thiram at 4g/kg of seed. Also spot drenching with 0.05 % Benomyl or 0.1 % Carbendazim is recommended.

Verticillium wilt: The causal organism of Verticillium wilt is Verticillium dahlia. Symptoms include interveinal chlorosis with bronzing of veins, yellowing, and leaves exhibit drying of leaf margins and areas between veins known as “Tigerstripe symptom”. Affected plants remain barren with pinkish discoloration in the stem and wood of plants. Management is by treating the delinted seeds with Carbendazim at 4g/kg of seed. Also spot drenching with 0.05 % Benomyl or 0.1 % Carbendazim is recommended.

Grey or Areolate mildew: Ramularia areola is the causal organism of grey mildew. Symptoms include irregular to angular pale translucent lesions on the lower surface, bound by veinlets, and grey powdery growth with light green specks on the upper surface. In case of severe infestation, whitish-grey powdery growth on upper surface. Management is by removing and destroying the crop residues. Spraying the crop with Carbendazim at 250-375g with repeat after a week.

Alterneria leaf blight: The causal organism of Alternaria leaf blight is Alternaria macrospora. Symptoms include small, plate to brown, irregular or round spots, may appear on the leaves and each spot has a central lesion surrounded by concentric rings. Several leaf spots coalesce together to form blighted areas. The blight affected leaves become brittle and fall off. Chemically controlled by spraying Mancozeb or Copper oxychloride at 2kg/ha at the intimation of the disease.

Bacterial blight: The causal organism of Bacterial blight is Xanthomonas campestris p.v malvacearum. Symptoms include water-soaked, circular, or irregular lesions on cotyledons that later spread to petiole and stem and finally withering and death of seedling called Seedling blight. Also, small, dark green, water-soaked areas develop on the lower surface of leaves, which enlarge gradually and become angular later restricted by veins and veinlets and these spots are visible on both the surface of leaves called Angular leaf spot. The infection of veins and veinlets shows blackish with crinkled and twisted leaves and bacterial oozing called as vein necrosis or vein blighting. Also black lesions on stem and branches, with premature drooping off of the leaves resulting in dieback known as Black arm. It also causes Boll rot.

Management of Bacterial blight disease of Cotton: Seed treatment with concentrated Sulphuric acid at 100 ml/kg of seed. Also treating the acid delinted seeds with Carboxin or Oxycarboxin at 2 g/kg or soaking the seeds in 1000 ppm Streptomycin sulfate overnight.

Maturity indices of Cotton: Maturity is determined when the bolls get completely opens.

Harvesting of Cotton: Harvesting is done in the cooler hours of the day. Picking kapas only from the well burst bolls and remove only kapas and leave the bracts in the plant itself.

Dry the kapas or Cotton lint in shade immediately after picking of bolls. The colour will change which will lower the market value if not dried immediately. Direct sun drying is not practised as it damages the fibre strength and luster. Grading the Kapas into good and second quality. Spreading a thin layer of dry sand in the ground and place the cotton over it. It is also stored in heaps or packed in gunny bags.

Yield of Cotton: It yields about 20-25 q/ha for improved varieties and about 30-40 q/ha for hybrids.