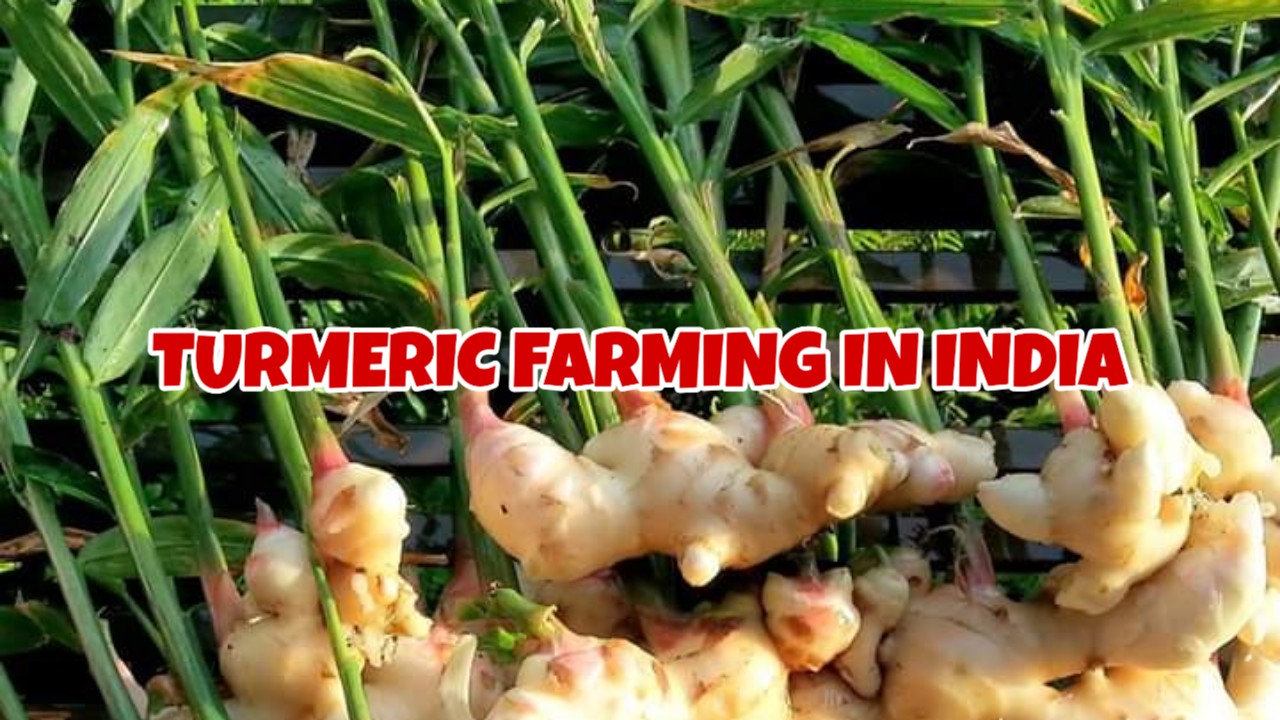 Introduction of Turmeric farming in India

Turmeric (Curcuma longa) belongs to the family Zingiberaceae.  The turmeric is a herbaceous perennial crop with long, broad, lanceolate and bright green leaves and pale yellow flowers with dense spike, where its rhizome is the edible and commercial part. Turmeric is a native crop of  South Asia. An important spice crop of India which is the oldest and sacred spice known as ‘Indian saffron’.  They are meant for their anti-cancer and anti-viral property used mainly in the drug industry and cosmetic industry. The main component on the occasions of the religious and ceremonial time. It is used as the main ingredient in cooking in terms of food colourant, besides which it has high medicinal value.

India is the largest producer, consumer, and exporter of turmeric all around the globe. Other major producers are Thailand, other Southeast Asian countries, Central and Latin America and Taiwan nearly 11 lakh tones of turmeric are produced every year. In which India contributes 75% of total production. In India, the leading producer of turmeric in Andhra Pradesh and is followed by Tami Nadu. The quality of turmeric is estimated by curcumin content which is high in Indian turmeric, thus having high value in the world market.

Madras and Alleppey are the two dominant varieties grown in India, which is named after the region of production. Alleppey turmeric contains about 3.5-5.5% volatile oils, and 4-7% curcumin. In contrast, the Madras type contains only 2% of volatile oils and 2% of curcumin. The popular commercial varieties in Andhra Pradesh are ‘Duggirala’ turmeric of Guntur and ‘Tekurpeta’ turmeric which has long, stout, smooth and hard fingers. ‘Kasturi Pasupa’ turmeric of the Godavari Delta, the ‘Armoor’ turmeric type of the Nizamabad area and the ‘Chaya Pasupa’ are the other important and major turmeric varieties of Andhra Pradesh. Roma, Suroma, Ranga and Rasmi are the important varieties in Orissa and Lokhandi in Maharashtra.

Soil and climate conditions for turmeric farming in India

Turmeric is mainly suitable for well-drained sandy or clay loam soil with pH  4.5-7.5. the optimum temperature for growth is 200C -350C with an annual rainfall of 1500 mm.

The whole or split mother rhizome or finger rhizome is used as propagating material each with at least one bud.

Select healthy rhizome and allow them to sprout by spreading them over moisture straw. Then the sprouted rhizomes are transferred to pro-trays containing FYM enriched coir pith media. The pits are made based on the recommended spacing in which ridges and furrow system is followed. The seedlings are placed at the shallow pits. A seed rate of nearly 1000 kg rhizome is required for rising turmeric in an area of one acre.

Turmeric requires high manuring. FYM or compost of 30-40 t/ha is to be applied at the time of land preparation. The recommended dosage of N:P:K is 60:50:120.

Mulching with green leaves is done immediately after planting and is done after every operation of weeding, application of fertilizer and earthing up.

Turmeric is raised along with coconut and areca nut crops. Also grown as an intercrop with chillies, onion, brinjal and with some of the cereals like maize, ragi, etc.

Shoot borer is noticed as a major pest, which can be controlled by cut opening those shoots and larvae picked out and destroyed. If necessary neem oil 0.5% may be sprayed at fortnightly intervals.

Leaf spot and leaf blotch are the diseases that can be controlled by restricted use of Bordeaux mixture 1% and the application of Trichoderma.

The crop will be ready for harvesting in 7-9 months after sowing. In which, The aromatic types mature in about 7 months, the intermediate types in about 8 months and the late types in about 9 months.  Generally, harvesting is done by ploughing the land and with the help of hand hoe and spade and the rhizomes are picked up. The adhering material to the rhizomes is washed off. The average yield of green turmeric per acre is about 8-10 tonnes.

Curing : Curing involves the boiling of rhizomes in freshwater and drying it in the sun. they are boiled in copper or earthen vessels till they turn soft. Boiling to be done within 2-3 days after harvesting. Then the rhizome is dried under the sun by spreading and are heaped during night time. It takes almost 10-15 days for proper drying. In order to improve its appearance smoothening and polishing are done.

Cost of cultivation of Turmeric

Turmeric farming profit in India: The total yield per acre is 8-10 tons. The price per kg is Rs.69 and hence, the turmeric farmer can get total returns of Rs.5,52,000. The benefit-cost ratio will be approximately 2.5.

Conclusion: The turmeric cultivation is a profitable process under proper management and maintenance.

6 thoughts on “How to Start Commercial Turmeric Farming in India”