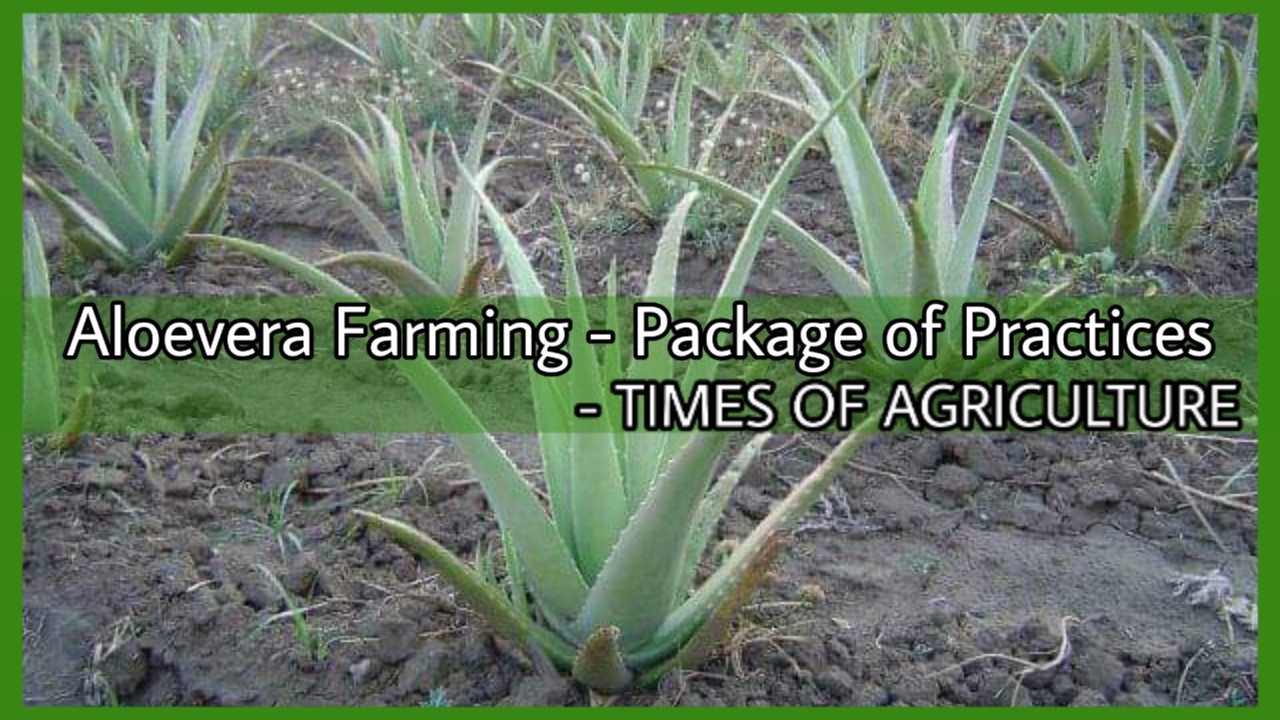 We all know that Aloevera Farming Package of Practices play a major role in Aloevera profits. Aloevera (Aloe barbadensis) belongs to the family Liliaceae is a hardy perennial succulent plant that is mainly grown for its medicinal value. Aloevera is also called a ‘miracle plant’. Aloe plants consist of 95% water and are frost tender. Aloevera requires a large quantity of water. It originates from the Africa continent. It has 250 species in the world and generally, it requires less maintenance. Aloevera is mainly cultivated for its fleshy leaves from which the yellow resinous latex or sap or anthraquinones are extracted. It is one of the oldest plants known to mankind. The major states of aloevera cultivation are Rajasthan, Uttar Pradesh, Gujarat, Tamil Nadu, Kerala and Maharashtra.

It is generally a tropical crop but it can be grown in wide climatic conditions. Extensive cultivation of Aloevera can be done in regions having 25 – 40°C.

There are three varieties grown in India namely

It can be grown in a wide range of soils from marginal to submarginal soils. The pH of soil ranges from 7.0 to 8.5. Well-drained laterite soils are the best soils for Aloevera cultivation. Aloevera can be successfully grown in saline soils. The soils must possess good drainage facilities. It also grows well in light soils.

Preparation of the land by 2 to 3 times ploughing with mouldboard plough to pulverize the soil and make it free from clods and also for the breakdown of organic matter present in the soil.

Planting of suckers for Aloervera Farming:

The root suckers are dipped in a 0.1 % Carbendazim solution for five minutes and planted in the field.

Seed rate for Aloevera farming: About 10,000 suckers are required for planting about one hectare. Suckers are cut about 15-20 cm long and planted with a spacing of 50*30 cm. Only one-third of the sucker is exposed above the soil.

In India, it can be planted in two seasons namely, June-July and September-October.

Insect pests of Aloevera, their symptoms, and different management practices:

Symptoms: Both nymphs and adults feed at the lower surface of the leaves or in rolled ends of affected leaves. They also have honeydew secretion that results in sooty mold development. Heavy infestation leads to slower growth and stunting of plants.

Diseases of Aloevera, their symptoms, and different management practices:

Symptoms: It causes circular black or brown lesions on the leaves. Oxidation of phenols present in the plant sap causes black spots on the leaves. It also causes back holes in the branches of the plant. The infected leaves drop down prematurely.

Symptoms: The disease is favoured by wet weather; spread easily by water splash. The infected leaf becomes watery due to bacterial decay. The plant gets rolled down and twisted. It also emits a foul odour. This disease is very severe during a rainy period.

Harvesting and Yield of Aloevera

Harvesting of Aloevera: A crop once planted gives production up to five-six years. For maximum productivity, the crop is cut after 9-10 months of planting.  For juice purposes, mature leaves of appropriate size are cut from the base of the plant.

Yield of Aloevera: Extensive yield is obtained during the second year of planting and continues until five years. Usually, three to four pickings can be taken in a year. The average yield is about 15-20t/ha.